There are definitely quotes that would suggest that Satan is the “Destroyer” and these quotes cannot be denied.  In many instances it is Satan who exercises destructive power.   The Spirit of Prophecy is very clear on this.

“Satan is the great enemy of God and man. He transforms himself through his agents into angels of light. In the Scriptures he is called a destroyer, an accuser of the brethren, a deceiver, a liar, a tormentor, and a murderer.” (5 Testimonies 137)

A reference to Revelation 9:11 where Satan is called “the destroyer”.  But is Satan the only angel that exercises destructive power in the scriptures.  We are told that God’s angels will exercise destructive power when commanded.

“A single angel  destroyed all the first-born of the Egyptians and filled the land with mourning. When David offended against God by numbering the people, one angel caused that terrible destruction by which his sin was punished. **The same destructive power exercised by holy angels when God commands,** will be exercised by evil angels when He permits. There are forces now ready, and only waiting the divine permission, to spread desolation everywhere.”—The Great Controversy, 614

Therefore an angel of God can sometimes be called the “destroyer”.  In fact Ellen White say’s it plainly when speaking of the plague that destroyed all the first-born of the Egyptians as referenced from the quote above.  She says this.

“Moses then told the king that the ***angel of God*** would slay their first-born.” – (Ellen White Story of Redemption 118)

So therefore “A single angel (of God) destroyed all the firstborn of the Egyptians” (GC 614)  And this angel of God is called “the destroying angel.”

“Sprinkle its blood on “the two side posts and on the upper doorpost” of the house, that the destroying angel, coming at midnight, might not enter that dwelling.” (PP 274)

Now the argument may be made that God allowed evil angels to come into the residence and do this, or that it was Satan.

Who is the “destroying angel”?

Psalms 78:49 He cast upon them the fierceness of his anger, wrath, and indignation, and trouble, by sending evil angels among them.

This quote is often used out of its context to say that all the plagues were from Satan, and he is the one who did all the destroying.  But the Bible doesn’t say that.   The Hebrew word for “sending” also means “release, discharge, allow”.   I believe “Allow” is a much better translation.  The bible does teach that God allowed the evil angels among them.   However, something that we must notice regarding the plagues and that is that although Satan and his angels were allowed among them, they were only allowed to counterfeit three of the plagues.  Notice the commentary:

“It was the hand of God, and no human influence or power possessed by Moses and Aaron, that wrought the miracles which they showed before Pharaoh. Those signs and wonders were designed to convince Pharaoh that the great “I AM” had sent Moses, and that it was the duty of the king to let Israel go, that they might serve the living God. The magicians also showed signs and wonders; for they wrought not by their own skill alone, but by the power of their god, Satan, who assisted them in counterfeiting the work of Jehovah.” { Ellen White Patriachs and Prophets Page 261, 2}

Only God could do all ten of the plagues.  Satan and his angels had no power to do all of them.  That included the destruction of the animals in those plagues, and finally the tenth which was the slaying of the first-born.

“Pharaoh called upon the magicians to do the same, but they could not. The work of God was thus shown to be superior to that of Satan. The magicians themselves acknowledged, “This is the finger of God.” But the king was still unmoved.” { Ellen White Patriachs and Prophets Page 261, 2}

So therefore though “evil angels” were allowed among them.  They only had so much power, and could not replicate the power of God.  It was again the “angel of God” that was the destroyer in this instance.

“The next morning a message was brought to David by the prophet Gad: “Thus saith the Lord, Choose thee either three years’ famine; or three months to be destroyed 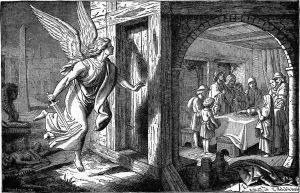 before thy foes, while that the sword of thine enemies overtaketh thee; or else three days the sword of the Lord, even the pestilence, in the land, and the angel of the Lord destroying throughout all the coasts of Israel. Now therefore,” said the prophet, “advise thyself what word I shall bring again to Him that sent me.”

The king’s answer was, “I am in a great strait: let us fall now into the hand of the Lord; for His mercies are great: and let me not fall into the hand of man.” { Ellen White Patriachs and Prophets Page 747, 8}

“The destroying angel had stayed his course outside Jerusalem.”  (PP 748)

So therefore God’s angel is sometimes called “the destroying angel”.  In the same sense we read in the same book Patriarchs and Prophets by Ellen White on page 269 concerning the plague of the hail:

“Ruin and desolation marked the path of the destroying angel.” (PP 269)

“Moses then told the king that the ***angel of God*** would slay their first-born.” – (Ellen White Story of Redemption 118)

Notice that the plagues of Egypt as well as the incident just mentioned concerning David’s numbering of Israel.   We see “destructive power exercised by holy angels”.   The destroying or destructive angels can sometimes be Satan’s angels and sometimes they are God’s angels.  Notice the following carefully with brackets added from quotes above concerning the two stories we just talked about for clarity sake:

“A single angel (of God) destroyed all the first-born of the Egyptians and filled the land with mourning. When David offended against God by numbering the people, one angel (of the LORD) caused that terrible destruction by which his sin was punished. **The same destructive power exercised by holy angels when God commands,** will be exercised by evil angels when He permits. There are forces now ready, and only waiting the divine permission, to spread desolation everywhere.”—The Great Controversy, 614 (Brackets added from quotes above)

Sometimes the angel commanded to destroy is a holy angel.  Satan’s angels are not “commanded” they are “permitted”.  It would not be in Satan’s interest to destroy the wicked when God commands.   Such as in Ezekiel 9 where we read of the final Passover.  An angel in fine linen, an angel of God is commanded to destroy.   Similar to the Passover in Exodus 12.  God does destroy, and it is not a rule that all destructive power is from Satan.  We need to be very careful when we quote the Spirit of Prophecy or else we can come off with doctrines that are completely contrary to hundreds of the plainest statements in scripture.

“The words will soon be spoken, ‘Go your ways, and pour out the vials of the wrath of God upon the earth.’ [Rev. 16:1] One of the ministers of vengeance declares, ‘And I heard the angel of the waters say, Thou art righteous, O Lord, which art, and wast, and shalt be, because Thou hast judged thus.’ [Rev. 16:] These heavenly beings, in executing the mandate of God ask no questions, but do as they are bid.  Jehovah of hosts, the Lord God Almighty, the just, the true, and the holy, has given them their work to do.  With unswerving fidelity they go forth panoplied in pure white linen, having their breasts girded with golden girdles. [Rev. 15:6]  And when their task is done, when the last vial of God’s wrath is poured out, they return and lay their emptied vials at the feet of the Lord.”  Testimonies to Ministers, p.431,432

That is the Destroying Angel.

“Satan deceives many with the plausible theory that God’s love for His people is so great that He will excuse sin in them; He represents that while the threatenings of God’s word are to serve a certain purpose in His moral government, they are never to be literally fulfilled.”  (Patriarchs and Prophets, p.522)

Satan and his angels are not always those who exercise destructive power.  Nor are they always called the destroying angel.   We need to be careful that we are not putting God into a box, and by this discarding half of the scriptures and the Spirit of Prophecy.

Back to Does God Kill Q&A

I Was Told God Doesn’t Kill – BUT IT IS WRITTEN

“Higher Criticism” and Placing Men Above the Bible

A Misunderstanding of Love and Justice – God Doesn’t Kill

The Son of Man Came Not to Destroy – Does God Destroy