I know some might immediately accuse me of getting myself 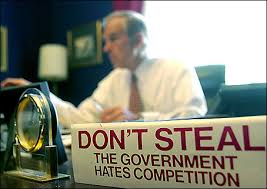 involved in politics, but I ask you to hear me first on this matter(Pro 18:13):

Ron Paul is not only in position to win the GOP nomination, but he is in a position where he can win the presidency of the United States. He is in the position where he may be able to aid in stopping a lot of human suffering and giving the message of liberty and freedom which was proclaimed in the early years of America. He is in the position of having the biggest platform in the world to proclaim this message and to “hold in check a powerful current of evil”.

The message will speak to the hypocrisy of 501c3 churches, trademarked names, making laws in respect to the establishment of religion.

“The Declaration of Independence sets forth the great truth that “all men are created equal,” and endowed with the inalienable right to “life, liberty, and the pursuit of happiness.” And the Constitution guarantees to the people the right of self-government, providing that representatives elected by the popular vote shall enact and administer the laws. Freedom of religious faith was also granted, every man being permitted to worship God according to the dictates of his conscience. Republicanism and Protestantism became the fundamental principles of the nation. These principles are the secret of its power and prosperity. The oppressed and down-trodden throughout Christendom have turned to this land with interest and hope. Millions have sought its shores, and the United States has risen to a place among the most powerful nations of the earth.” {Ellen White Great Controversy 1888 page 441}

May we all pray for this man. I don’t believe he is a politician, but rather is fighting against bureaucracy, against federal organizations which keep you from being able to homeschool your children, organizations that force you to put chemicals in your body by means of vaccinations etc, organizations which are making by-laws restricting your rights to freedom of speech concerning things like abortion and homosexuality, creating unconstitutional laws against speech.

There is little hope left for humanity, however, I believe that there are small rays of light that will set forth a character which reflects that of Christ, without hypocrisy. I know some of you will say “He keeps Sunday” or “He believes this…or that” etc… It’s not about that.

May Father give us spiritual eyes so that we can see “the weightier matters of the law, judgment, mercy, and faith:”(Matthew 23:23).

Recently laws in the United States have been enacted which restrict your rights to carry out your faith without having the government tell you how and what you can do. Wars have been carried on which have destroyed millions of lives around the world all in the name of spreading goodness and democracy. Christians who influenced these wars are being brought back around to the message of Christ regarding these principles after many of their children were brought home in body bags.

Mat 5:9 Blessed are the peacemakers: for they shall be called the children of God.

This is not about politics, this is about freedom and liberty, rather for liberty of conscience to be able to home school your child without running into 15 government agencies, paying thousands of dollars in getting permits etc.

There is not a lot of time left in this world, however others may not understand the principles this country was established on, and this is an opportunity to proclaim that message. We are quickly filling up the cup of his wrath and soon it will overflow and the plagues will fall. However, we have an opportunity here to push against the hypocrisy that has rough rode this nation, the leaders that many have beheld and become changed by.

Whether it’s about a government agency forcing you to get a vaccination or a national Sunday Law, they all are unconstitutional. The powers that be in the offices of the United States do not want to give the message of liberty to the people.

“When Protestantism shall stretch her hand across the gulf to grasp the hand of the Roman power, when she shall reach over the abyss to clasp hands with spiritualism, when, under the influence of this threefold union, our country shall repudiate every principle of its Constitution as a Protestant and republican government, and shall make provision for the propagation of papal falsehoods and delusions, then we may know that the time has come for the marvelous working of Satan and that the end is near.”{Ellen White Maranatha page 190}

I don’t believe Ron Paul is a politician, but rather a “statesmen”. And this is what we read about “statesmen” in the Great Controversy during the “loud cry”. The following quote is speaking about men who would hold in check the powerful current of evil:.

“While many of our rulers are active agents of Satan, God also has his agents among the leading men of the nation. The enemy moves upon his servants to propose measures that would greatly impede the work of God; but statesmen who fear the Lord are influenced by holy angels to oppose such propositions with unanswerable arguments. Thus a few men will hold in check a powerful current of evil. The opposition of the enemies of truth will be restrained that the third angel’s message may do its work. When the final warning shall be given, it will arrest the attention of these leading men through whom the Lord is now working, and some of them will accept it, and will stand with the people of God through the time of trouble.” {Great Controversy 1888 610}

These words are being fulfilled before your eyes.

I also had the following quotations sent to me…

“We cannot labor to please men who will use their influence to repress religious liberty and to set in operation oppressive measures… The people of God are not to vote to place such men in office, for when they do this they are partakers with them of the sins which they commit while in office.”–FE 475 (1899).

“Oppressive” or “liberating”? You be the judge, is Ron Paul sharing a message that will “repress religious liberty and…set in operation oppressive measures”? Or is he for religious liberty? Do your research and may God lead you in answering that question.

“There is a cause for the moral paralysis upon society. Our laws sustain an evil which is sapping their very foundations. Many deplore the wrongs which they know exist, but consider themselves free from all responsibility in the matter. This cannot be. Every individual exerts an influence in society.

Every Voter Has a Voice.–In our favored land, every voter has some voice in determining what laws shall control the nation. Should not that influence and that vote be cast on the side of temperance and virtue? . . .” {Te 253.3}

I am not giving a voice to any political party, or anything of that sort. Merely saying that when there is “a cause” we should be careful that we are not like the many who ” deplore the wrongs which they know exist, but consider themselves free from all responsibility in the matter.”

“Resolved, That in our judgment, the act of voting when exercised in behalf of justice, humanity and right, is in itself blameless, and may be at some times highly proper; but that the casting of any vote that shall strengthen the cause of such crimes as intemperance, insurrection, and slavery, we regard as highly criminal in the sight of Heaven. But we would deprecate any participation in the spirit of party strife.”(The Advent Review and Sabbath Herald, May 23, 1865)

Southern CROSS – Is it Flat or is there a South Pole