Is it natural(Nature) power that destroyed during the flood? Was it just nature taking its course?  Or was there something beyond and above the laws of nature(super natural) that accomplished the flood? This quote has much to say on that if we will read and reason through it carefully…

“But God made the philosophy and science of men foolishness when the time had fully come to execute his word. The inspired pen describes the earth as standing out of the water and in the water. God had his weapons concealed in the bowels of the earth to compass her destruction. And when the great men and the wise men had reasoned before the world of the impossibility of its destruction by water, and the fears of the people were quieted, and all regarded Noah’s prophecy as the veriest delusion, and looked upon Noah as a crazy fanatic, God’s time had come. He hid Noah and his family in the ark, and the rain began to descend, slowly at first; the jeers and scoffings did not cease for a time, but soon the waters from heaven united with the waters of the great deep; the waters under the earth burst through the earth’s surface, and the windows of heaven were opened, and man with all his philosophy and so-called science, finds that he had not been able in his worldly wisdom to comprehend God. He found too late that his wisdom was foolishness; that the Lawgiver is greater than the laws of nature. The hand of omnipotence is at no loss for ways and means to accomplish his purposes. He could reach into the bowels of the earth and call forth his weapons, waters there concealed, to aid in the destruction of the corrupt inhabitants of the old world. But let us all bear in mind that those who perished in that awful judgment had an offer of escape. ST January 3, 1878, par. 8

Summary of quote:
1. It was the power of God which is above the laws of nature that accomplished the flood.

2. According to the laws of nature, it was impossible for nature to cause a flood by itself without “the hand of omnipotence” reaching “into the bowels of the earth and call forth his weapons”.

3. It was God who destroyed the earth by a flood, not human power, not Satan’s power, not natures power. It was “supernatural” and was only by the “omnipotent hand”..

“God’s love is represented in our day as being of such **a character as would forbid His destroying the sinner.** Men reason from their own low standard of right and justice….
The plea may be made that a loving Father would not see His children suffering the punishment of God by fire while He had the power to relieve them. But God would, for the good of His subjects and for their safety, punish the transgressor. God does not work on the plan of man. He can do infinite justice that man has no right to do before his fellow man. Noah would have displeased God to have drowned one of the scoffers and mockers that harassed him, but God drowned the vast world. Lot would have had no right to inflict punishment on his sons-in-law, but God would do it in strict justice.
Who will say God will not do what He says He will do?”—Ellen White Manuscript Releases 12:207-209;

We have to be careful that we are not exalting nature above God. Ellen White wrote about this when God threw down stones from heaven and killed those who were coming against the Gibeonites. Some were saying in her day that nature took its course. Some say it was Satan… The bible and her say they are wrong…

Jos 10:11 And it came to pass, as they fled from before Israel, and were in the going down to Bethhoron, that the LORD cast down great stones from heaven upon them unto Azekah, and they died: they were more which died with hailstones than they whom the children of Israel slew with the sword.

But she says that both the idea of the power of nature and power of Satan being exalted above the power and judgment of God is wrong.

“This mighty miracle testifies that the creation is under the control of the Creator. Satan seeks to conceal from men the divine agency in the physical world—to keep out of sight the unwearied working of the first great cause. In this miracle all who exalt nature above the God of nature stand rebuked. { PP 509.2}

At His own will God summons the forces of nature to overthrow the might of His enemies—“fire, and hail; snow, and vapor; stormy wind fulfilling His word.” Psalm 148:8. When the heathen Amorites had set themselves to resist His purposes, God interposed, casting down “great stones from heaven” upon the enemies of Israel. We are told of a greater battle to take place in the closing scenes of earth’s history, when “Jehovah hath opened His armory, and hath brought forth the weapons of His indignation.” Jeremiah 50:25. “Hast thou,” he inquires, “entered into the treasures of the snow? or hast thou seen the treasures of the hail, which I have reserved against the time of trouble, against the day of battle and war?” Job 38:22, 23. { PP 509.3}

The revelator describes the destruction that is to take place when the “great voice out of the temple of heaven” announces, “It is done.” He says, “There fell upon men a great hail out of heaven, every stone about the weight of a talent.” Revelation 16:17, 21.” { PP 509.4}

Some may say that is God “letting go”. That argument is like someone holding a giant rock from falling on someone and then letting go of it. Whether you believe it or not the person who let go and had the power to hold on actually killed you. The doctrine that God Doesn’t Kill does not stand the test of investigation and contradicts and spiritualizes away much of scripture. The danger is not discerned by many.

The bible says it plainly:

Gen 6:7   And the LORD said, I will destroy man whom I have created from the face of the earth; 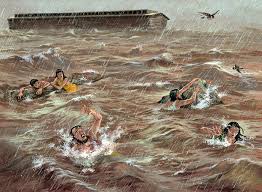 Gen 6:13  …I will destroy them with the earth.
Gen 6:17 And, behold, I, even I, do bring a flood of waters upon the earth, to destroy all flesh, wherein is the breath of life, from under heaven; and every thing that is in the earth shall die.

It is certainly God who took credit for the flood.

“Satan himself, who was compelled to remain in the midst of the warring elements, feared for his own existence.”  (Ellen White Patriarchs and Prophets Page 99)

Notice that Satan was even afraid for his life.  He definitely was not the destroyer here.  But then after seeing the judgments of God, he started to try to use this to impress that God was evil and that a good God was too loving to destroy the earth.  This sin was idolatry, creating a God in their own mind that fit the thoughts of their own mind.  A violation of the second commandment.

“He now uttered imprecations against God, charging Him with injustice and cruelty. Many of the people, like Satan, blasphemed God, and had they been able, they would have torn Him from the throne of power.”  (Ellen White Patriarchs and Prophets Page 99, 100)

Is the Message that God Doesn’t Kill the Character of God Message?

“As sin became general, it appeared less and less sinful, and they finally declared that the divine law was no longer in force; that it was contrary to the character of God to punish transgression; and they denied that His judgments were to be visited upon the earth.” (Ellen White Patriarchs and Prophets Page 99, 100)

We need to be careful not to say God’s word is wrong, unmerciful, unjust, evil, a murderer, an extortioner as I’ve heard some say for doing what He says He will do.  This is where it all started with Eve…  Satan spiritualized away the plainest statement.

“Although God had been provoked to destroy the earth by the flood, yet his mercy still encompasseth the earth.” (Ellen White The Signs of the Times 03-06-1879)

Back to Does God Kill Q&A

I Was Told God Doesn’t Kill – BUT IT IS WRITTEN

“Higher Criticism” and Placing Men Above the Bible

A Misunderstanding of Love and Justice – God Doesn’t Kill

The Son of Man Came Not to Destroy – Does God Destroy